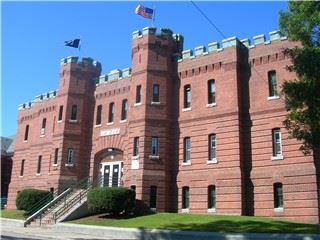 On Friday evening December 16, 1910, the Town Of Attleborough dedicated its new armory. This grand looking building was then, as it remains today, the "Castle" at 81 Pine Street.

After the horror of the Civil War, there was a long period of relative peace in the country. In general, it was the first time of stability with little concern for national defense. When the idea of erecting an armory was put forth, it was met with ridicule by many of Attleborough's leading citizens.

Company I, which was part of the 5th Regiment of the Massachusetts Volunteer Militia, had been associated with the town since its formation in 1887. Later that year, the town was ordered to provide a suitable meeting place for the company.

The site selected was Park Hall, which thereafter came to be known as Armory Hall. Unfortunately, Armory Hall was destroyed by fire on May 8, 1902. After the fire, the company had to endure many years of talk concerning their complete disbandment.

At a town meeting in 1903, almost three-quarters of the citizenry voted against having the company in town and in fact, asked them to move elsewhere.

Again in 1903, the board of selectmen voted against building even temporary quarters for the company, but this action would not last and within a short period of time, the idea of a completely new armory would begin to gain acceptance and support.

In December 1910, the new armory was completed and ready to open its doors. Gov. Eben S Draper was on hand to do the honors, and all told there were about eight-hundred guests in attendance. Company I was called to service in 1917, during World War One.

On July 25, 1917, the company was federalized, and on September 7, they sailed to France to become part of the American Expeditionary Force.

In 1942, the company was once again called to defend its country and served with distinction until the end of World War II. On Friday, October 4, 1946, the returning veterans were treated to a welcome home ball held at the same armory from which many of them had departed several years before.  Mayor Francis O'Neil and members of the City Council were on hand, as well as a number of leading citizens, to celebrate the homecoming.

Through the 1950s and mid 1960s military trucks and jeeps were often seen in the alley beside the armory along with uniformed soldiers readying for assignment to far away places such as Korea. To this day both the American and P.O.W. - M.I.A. flags fly proudly atop the Castle as a reminder to all generations of the sacrifices our forefathers made to ensure our nation's freedom.

For many years the armory served as the home court for the Attleboro High School basketball team. Many residents fondly recall "the good old days" when people started lining up at 3:30 in the afternoon to be assured a seat for that evening's game. The armory was also renowned as host for many community social events including the annual Policeman's Ball, athletic banquets, home shows and more.

In 1969, the City of Attleboro took over the National Guard Armory for use as a recreation center for the residents of Attleboro. Under the direction of Recreation Director Fredric Bartek, the Attleboro Recreation Center was created. With the creation of the center, the recreation department was able to greatly expand recreation programs and opportunities, especially for the city's youth. The building also houses the recreation maintenance department.

On Saturday November 27, 2004, the city rededicated the building in honor of former Recreation Director Fred Bartek. Fred was the city's first Recreation Director and held that position for over thirty-two years. During that time Fred was responsible for the development, growth and expansion of recreation in the city. The grand old building on Pine St. has served the City of Attleboro and its residents honorably and faithfully for nearly one-hundred years, and continues to do so, fittingly, as the Fredric M. Bartek
Recreation Center.